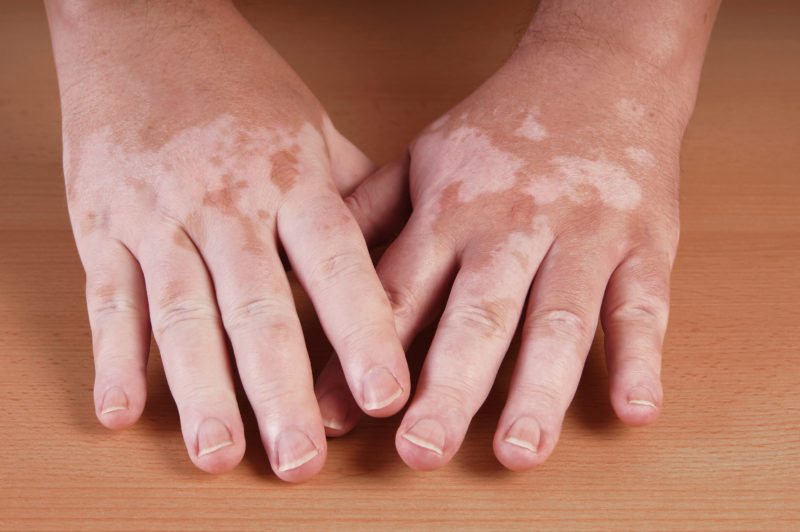 Question: What is vitiligo?

Vitiligo and the medical issues:

Vitiligo is a type of autoimmune disorder that causes the loss of color in patches of skin and sometimes hair, mucous membranes (like in the nose or mouth), and eyes. When a person has vitiligo, the cells that normally produce skin color, called melanocytes, die or stop working properly causing white patches to appear.  These patches are most often first seen on the hands, feet, arms, and face, parts of the body that get the most sun exposure. However white patches can also appear on other parts of the body and can spread over time.

Doctors still do not know what causes vitiligo and cannot predict who will get it or whether it will spread. Most people with vitiligo begin seeing white patches in their twenties but it can develop at any age. There are no other medical symptoms of vitiligo. There are some treatments for the skin patches but there is no cure to stop the appearance of more white patches.

What Vitiligo Is Not

Vitiligo is not the only skin condition that results in depigmented skin. It’s important to know what how vitiligo is different than other conditions, some of which are caused by fungus and bacteria infections.

Some of those feared disases include the following:

Vitiligo is not skin deep…

Vitiligo is much more than skin-depigmentation for those who have it. The internal medical issues associated with vitiligo are important to discuss because unaddressed these issues will continue to manifest. Common issues that often go along with having vitiligo are: digestion, poor thyroid function, vitamin and mineral deficiencies. It’s worth consulting with a health professional about these issues if you have vitiligo.

Because of the random, and seemingly uncontrollable progression of vitiligo, many people suffer from anxiety, depression, poor self-esteem, social anxiety and professional anxiety. Because vitiligo is an uncommon and unwelcome change to the appearance in our world where appearance holds such power in many cultures, it can be difficult to deal with. Vitiligo confronts our self-image, vitiligo confronts our ideas about what’s in our control and not in our control, vitiligo, confronts our ideas about what other people think and feel about us and it effects our imagination about what’s possible in life.

The truth about vitiligo is simple: it’s doesn’t change anything except skin pigment. Our potential for a happy, fulfilled life is not changed by vitiligo, but its understandable why someone might feel otherwise.

The core emotional issues that commonly effect people with vitiligo are:

In forums all over the internet, Facebook and here on this website people express their fears about vitiligo:

These questions and others can often lead to a period of depression and confusion. That hardest thing to come to terms with for myself is this: vitiligo changes skin pigment but doesn’t really change anything else. But people do come to terms with vitiligo successfully. People get married, have children, work, progress in their careers, build businesses: people live with vitiligo successfully everyday, just like people learn to live and love while dealing with cancer, heart disease, diabetes and every other kind of medical issue.

It seems like vitiligo changes everything including appearance, likability, desirability, social standing, job eligibility, but in reality with the right attitude and awareness, vitiligo doesn’t negatively effect the potential for a full and good life.

Vitiligo is just another thing in life that we must learn to respond to with a good attitude. If approached in this way, vitiligo looses its power over out lives.

What can you do about vitiligo?

While vitiligo can be frustrating, it can also be a source of strength, if approached with the right attitude.

What is vitiligo? It’s really up to you.