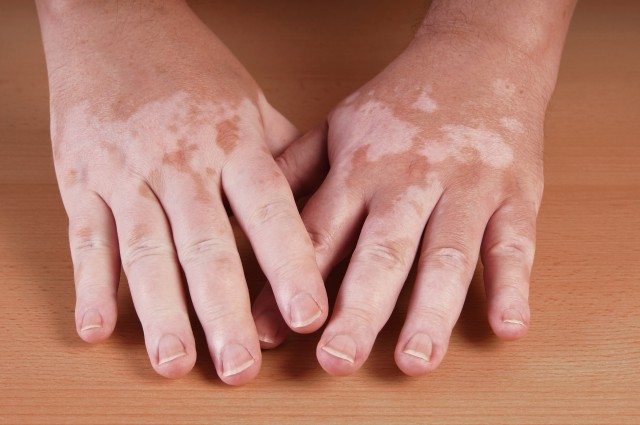 Why do people discriminate against people with vitiligo?

For those of us that have vitiligo, the fear of rejection because of vitiligo goes to our very core. It’s on our minds, it’s in our hearts, it comes across in our actions. One of my readers writes:

I have had several bad relationships with guys who never truly accepted me or my body.

It’s something we have all feared at one time or another. Perhaps we stop wearing clothes that show vitiligo, perhaps we wear makeup, men and women, to cover vitiligo and perhaps we don’t go outside as often for fear that we would be judged, be rejected because of a skin disease.

This is what we fear, even when we are in a relationships.

This is what Rep. Parren Mitchell meant when he wrote in the proposed National Vitiligo Control Act: that vitiligo “cripples the personality of individuals suffering from” vitiligo.

Her are some more comments from my blog:
My self esteem doesn’t exist anymore and I feel like I will never feel the happiness I did before.

An another:
She is so cautious and careful what she says, always concerned that I might come to love her less and find someone else. But it is so not true, and it is hard to explain her. She has these “people in her head” I call it that probably constantly tell her to be suspicious. She has become so jealous.
It is not just this skin condition which makes it hard, it is the mental effect.

Another:
In this 11 yrs of journey with this disease, i’ve worst experiences in my schooling, college where i’m harrassed, teased, left alone. No one was there for me then. I’m even in a relationship which ended very badly. There is nothing in my life that i can feel confident & happy about. Neither my family is strong financially nor I’m an unwanted person in the family. I cry alot for their effection,love & care.I want my mom to touch me affectionaly. But she doesnt.

This is what we must all help each other and ourselves with.

If you are living in the USA, UK, Canada or other first world countries there is a better chance of having an easier time than people in developing countries, in Africa and East Asia. The high contrast of dark skin next to skin with zero pigment coupled with a lack of awareness about diseases, means that men and women with vitiligo are routinely estranged, abandoned, shunned because of vitiligo.

How should we live together? What’s the right thing to do about vitiligo?

It’s important to note that vitiligo affects each of us differently regardless of skin tone. Light, dark, and everything in between doesn’t matter to vitiligo.

I have heard from people all over the world discussing these very issues. Men worry about marrying a women with vitiligo. Parents worry about their children being able to find a spouse. Children go to school and are made fun of. I even hear of teachers judging children in their care because of vitiligo.

For children, vitiligo can be particularly troublesome. There are stories of children being mistreated by teachers, ostracized and ignored. If people don’t understand that the disease is contagious this mistreatment, will continue. So, this is not just an issue of depression, or being shy. It’s an issue of ethics.

In Nigeria, my friend Ogo has founded a campaign to address these issues. As part of that, she created this cartoon that illustrates how vitiligo effects lives in West Africa:

It’s a scary reality the world over. Vitiligo and other skin diseases are not just cosmetic issues. These disorders are the cause of division, rejection and pain.

What do we do?

We have one example in Parren Mitchell. You can ask your government to sponsor research into understanding and treating this disease. For those of you that don’t like the idea of using taxpayer dollars on medical research might note that the vast majority of medical research in universities, here in the US and elsewhere is paid for by governments. Cancer research, vaccines, AIDS and HIV and more are supported greatly by government grants.

In China, there are entire hospitals and clinic that are dedicated to treating vitiligo.

Here in the US there are organizations that focus on raising funds for vitiligo such as:

It’s critical that research be done on the disease particularly autoimmune diseases, many of which are far more medically debilitating than vitiligo.

But what else can we do, we as individuals with vitiligo? How can we help people where we live and around the world that have vitiligo, struggling with social stigma, depression and fear? What can we do besides fund scientific research?

We will cover what I think in part 3.

For now, when have you experienced fear of rejection or actual rejection because of vitiligo? What did you do? How did you feel?

Please let me know in the comments! Look forward to hearing from you!